Do We Say Marijuana Or Cannabis? A Bit Of History

What is in a name? Origins, history, perception, politics.

The cannabis plant is grown and consumed in many countries around the globe. It goes by many names and has accumulated many nicknames. But Marijuana is probably the most controversial, at least in America. Some think it's a racially charged term that shouldn't be used. Many don't truly understand why.

It's not the word itself that is bad. As it is a term used for the plant by many people in various countries across the globe and for 100s of years. Or at least a term that closely resembles what it may have been called by other languages.

The problem comes from the perception created around the drug and the people using it through the use of a purposeful and intended connotation by the media to sway the public opinion.

The current perception of the drug and its name, “marijuana”, can largely be attributed to a few significant people and a couple of timely events.

In America, the cannabis plant was simply referred to as cannabis before about 1910.

The term marijuana was never even heard of or used.

It's not that cannabis wasn't here in the country or that it wasn't used. It absolutely was. Early pharmacists often used the plant and its extracts in their medicinal remedies to cure common ailments.

It also became popular among wealthy white people to “experiment” with cannabis products because they could afford imported products. But for the most part, Americans didn't realize they could smoke it.

The Mexican Civil War and the great migration

Smoking was not a form of consumption until the early 1910s, when Mexican immigrants seeking legal asylum brought the practice with them. After the Mexican Civil War, almost 900,000 Mexicans legally immigrated to the U.S.

This marked the beginning of an era of racial bias and white xenophobia that still exists today.

Anti -immigrant fears continued to grow as migrants flooded the Southwest. And those fears only grew greater with the Great Depression as Americans looked for someone to blame.

Migrants brought the plant with them to California, Texas, and along the Gulf of Mexico, including New Orleans. It was there that the drug really became associated with black people, jazz musicians, and prostitutes. The media went crazy spreading hysteria with their stories of marijuana users losing their minds, becoming violent and sex crazed.

Because of this, border states were the first states to ban the plant.

The first state to pass a bill that criminalized the cultivation of cannabis is also the first state that would legalize the drug less than 100 years later. In 1913, with a big push from the Board of Pharmacy, California passed the Bill to ban cannabis. Interestingly, the bill did not aim to ban cannabis for the sake of cannabis. It's part of broader legislation where the concern was mainly on regulating narcotics with a focus on opiates.

California’s ban wasn't a result of a larger public concern about marijuana use or racial prejudice. It would be 24 more years before a perceived federal prohibition in 1937.

By that time, 29 more states had banned the plant.

Before all of this, Americans only knew the plant as cannabis. Marijuana was largely unknown by the American public. Many times when reading early newspaper accounts regarding the drug, people didn't realize the marijuana they were referring to was cannabis. This was a well thought out government campaign to demonize the plant and the people who used it.

Harry Anslinger (and his perception of marijuana)

Harry Anslinger was a known xenophobe that reveled in spreading anti-Mexican immigrant sentiment. He was also appointed the first director of the newly formed Federal Bureau of Narcotics under Hoover in 1930. A position he would hold for the next 32 years.

Many view Anslinger as an early proponent of the war on drugs. He worked tirelessly towards a federal ban on marijuana and he did it by spreading fear around the plant's use and the people who used it.

Harry Anslinger is largely attributed with introducing the term “marijuana” and making sure it was associated with “degenerates of lower races”. Anslinger specifically used the term marijuana when making public anti-drug speeches or advertising.

They chose to use the term marijuana specifically because they thought it sounded exotic and foreign. He specifically chose the Spanish term marijuana, instead of cannabis, to connect the drug to Mexicans, blacks, and Filipinos.  Then they used the term in news reports and propaganda claiming the drug caused people to become violent, crazy, and lust for sex.

Carefully crafted newspaper articles were meant to spread misinformation in order to raise fear and xenophobia in the American public. These articles often depicted marijuana as a drug that caused blacks, Mexican immigrants and “people of lower classes” to lose their minds and become violent criminals.

A new, broader form of media was in its heyday. During the 20s and 30s, lavish movie palaces were built all across America. Americans loved to visit the theaters, especially during the Depression, where people would go to movies to escape the realities of life.

Movie theaters became an efficient way to reach people with your message. This was a way for Anslinger to push his racist narratives to white audiences that marijuana was a dangerous drug.He used the media form to spread misinformation and paint marijuana as a degenerate drug only used by people of “lower races”. The term was specifically used in racially charged messages in propaganda films about drugs, such as Reefer Madness.

His use of the Spanish-origin word marijuana was specifically done to try to differentiate marijuana from the perception Americans had about the plants, commonly consumed by Americans and used in medicines known as cannabis. This was the beginning of decades of propaganda, misinformation, and anti-immigrant sentiment driven by racism and fear.

Knowing that the federal government did not have the power to ban cannabis, Anslinger drafted and helped pass the Marijuana Tax Act of 1937. This effectively criminalized the cultivation, sale, and importation of marijuana. The Act did not necessarily prohibit marijuana, but it did allow the government to regulate it. The tax levied was so heavy that they knew most would be unable to pay it. And failure to comply with the tax would result in a $2000 fine and jail time of up to 5 years. This basically criminalized marijuana.

The important point is why they did this. They purposefully wanted to create a sense of fear around marijuana, and the people who used it. Who, of course, were different from the white, wealthy Americans and doctors who used cannabis.

President Nixon and the Controlled Substances Act of 1970

It was the culmination of a vast political campaign and marketing effort aimed at controlling certain communities and creating a perception in American’s minds regarding those communities.

One famous alleged quote tells the story. John Ehrlichman was one of Nixon’s top advisors during the 1968 campaign. Decades later, during an interview with author Dan Baum for his book “Smoke and Mirrors”, Ehrlichman allegedly admitted that the War on Drugs was a political tool specifically created to control “blacks and hippies”.

As John Ehrlichman, Counsel and Assistant to the President for Domestic Affairs under Nixon, famously admitted: 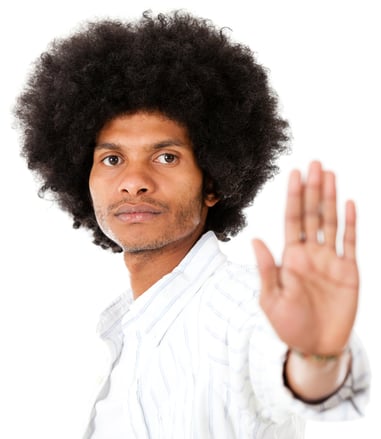 “We knew we couldn’t make it illegal to be
against the war (Vietnam) or Black, but by
getting the public to associate the hippies with
marijuana and the Blacks with heroin, and
then criminalizing both heavily, we could
disrupt those communities. We could arrest
their leaders, raid their homes, break up their
meetings, and vilify them night after night on
the evening news. Did we know we were lying
about the drugs? Of course we did.”

It's true Nixon was a racist, and he despised drugs. But it likely wasn’t his main goal with his war on drugs. If this statement is true, it seems they latched on to the continuing anti-Mexican and anti-black sentiment created decades before by Anslinger’s racist rhetoric. It was another political campaign to win the White House.

Racial disparity continues all across the nation

If you think things have changed since the mid-1900s, think again. Studies show not much has changed at all. Study after study shows that white and black people across America use marijuana at almost the same rate. Yet, despite this, Black and Brown people continue to be disproportionately targeted and arrested.

The ACLU conducted two studies over the last 20 years to measure the level of racial disparity that exists in marijuana arrests across America. The first study covered the decade from 2000 to 2010. The most recent scoured data from 2010 to 2018, and compared it with the previous decade to measure what, if any, changes have occurred along with greater state legalization.

What they found was that there continues to be enormous racial disparity in marijuana arrests in ALL states across America. Even in the states that have legalized recreational consumption of marijuana and/or decriminalized possession.

This shows us that 100 years later, marijuana enforcement across the nation is still as racialized as it ever was.

The cannabis plant has existed in America since the country was founded. It was used medicinally by pharmacists and doctors, and recreationally by elite white folk prior to 1910. It was only known as “cannabis” as the word marijuana did not exist in America until Henry Anslinger began using it in his propaganda. So was the problem the plant or the people?

The word itself, “marijuana”, didn’t begin as a racist term. It is the most commonly known term in America today for the cannabis plant. And it is likely that most Americans don’t fully understand the history of the term and how it was used to spread racist rhetoric that would shape the views of the public. But in countries like Europe and most of South America, the plant is still most commonly referred to as cannabis.

But some believe that the term cannabis is not common in many communities and the use of it alienates the people most connected to the plant.

Some believe that we can't just change a word and that to stop using it would be an ill-attempt at erasing history and the people most affected by it.

Should we stop using the term “marijuana”? That is a question as complicated and weighty as the plant itself.