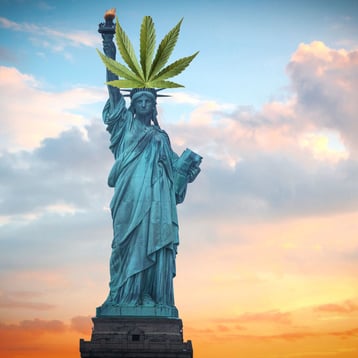 Following the midterms, voters in 2 more states succeeded in passing cannabis legalization measures, bringing the total number of legal states to 21, plus the District of Columbia.

But, a possibly more important development happened one week later when a hearing held by Congressional lawmakers examined the current cannabis legality conundrum.

Here's what's been happening on the Hill.

Cannabis legalization continues to move across the U.S., albeit slowly.

As the election date drew nearer, 6 states were poised to vote on adult use cannabis legalization on the Nov 8 midterms.

But by mid-August, it became clear that Oklahoma couldn't get through the red tape to submit the required signatures to make the November ballot. As of now, they’ve promised to vote on legalizing cannabis in 2024.

All 5 states that voted on legalizing cannabis in the midterms already currently run medical marijuana programs.

Only two states, Maryland and Missouri, voted to pass adult purchase and possession measures legalizing cannabis in their state. This brings the total number of states with legal cannabis use to 21 and the district of Columbia.

Adults 21 and over may purchase up to 1.5 ounces, or grow two marijuana plants, beginning July 1, 2023. State lawmakers still have to undergo the task of creating the framework around licensing and taxation of the industry.

Under Amendment 3, adults 21 and over may purchase and possess up to 3 oz of cannabis and cultivate up to 6 flowering plants.

Missouri created a framework for the regulated cannabis market prior to the passage of the measure. Taxation levies a 6% excise tax on retail cannabis. This tax will fund health care for veterans, treatment for substance misuse, expungement of prior offenses as well as fund the state’s public defender system. 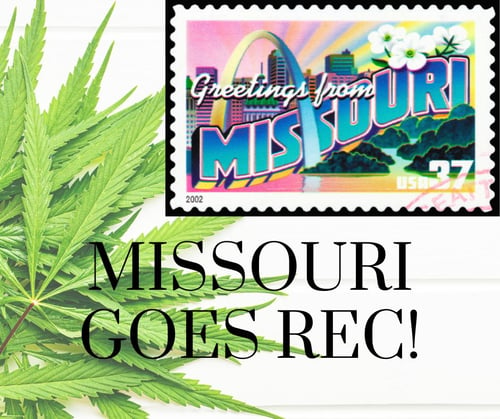 Arkansas, North Dakota, and South Dakota voters rejected legalization measures in their states. This isn’t necessarily a setback to the legalization since each of these measures had significant flaws.

For instance, South Dakota had a proposal that would have legalized possession of 1 oz and cultivation of up to 3 plants. But it contained no provisions for the creation of a regulated market.

And in Arkansas, Issue 4 would have allowed purchase and possession of up to 1 oz. But it failed to include any provisions for expungement of prior criminal offenses or social equity provisions.

In each of these states, measures were rejected by a fairly narrow margin, meaning that there is still a lot of support for legalization. This gives advocates time to keep working on and improving the quality of the measures. And since all three states currently operate successful medical marijuana programs, it's likely they will convert to adult-use programs, eventually.

In fact, South Dakotans voted to approve adult-use legalization in 2020, but it was struck down by the South Dakota Supreme Court. There is no doubt it will be on the ballot again soon.

To keep up on the status of legalization in all 50 states, visit our resource page The BIG Cannabis Law Map.

Important things are happening regarding cannabis on the congressional level too.

Lawmakers on all levels across the U.S. are beginning to open their minds and broaden their understanding of the cannabis plant and its potential benefits.

One interesting example is the November 15 Executive Order issued by the Governor of Kentucky, Andy Beshear. Kentucky is one of only 12 states where cannabis is still illegal in all forms, including for any medicinal use.

The governor doesn’t want to wait for laws to change before his citizens can get relief, stating “Kentuckians suffering from chronic and terminal conditions are going to be able to get the treatment they need without living in fear of a misdemeanor”. The executive order allows adults 21 and older to possess and use small amounts of medical cannabis beginning January 1, 2023. They must meet at least one of 21 medical conditions and the cannabis must be purchased legally and they have to keep the receipt to prove it.

Lawmakers in Congress passed the first standalone cannabis reform since adding cannabis to Schedule 1 of the Controlled Substance Act. The “Medical Marijuana Cannabidiol Research Expansion Act” facilitates cannabis research and removes FDA barriers to research. While this is the first time Congress has passed a bill solely relating to marijuana, industry advocates are hoping it's just the first of many.

In another positive gesture, President Biden recently granted a federal pardon to about 6500 people with non-violent, misdemeanor cannabis possession charges. He is also urging state leaders to take action to expunge records for nonviolent cannabis charges as well.

And in an unprecedented move, President Biden issued a request to review the Schedule I status of cannabis by both Attorney General Merrick Garland and the secretary of Health and Human Services (HHS) Xavier Becerra.

On the public level, we’ve already experienced a sweeping shift in opinion about cannabis and cannabis use. In fact, Nationwide public support for cannabis legalization has been at an “all-time high” for three years in a row.

This doesn't necessarily mean anything is going to happen any time soon. And there are plenty of arguments against any kind of rescheduling (other than complete descheduling) of cannabis to a lower level Schedule, anyway.

What it does mean is that we're seeing a shift in overall opinion towards cannabis on the federal congressional level. This sentiment was echoed when Congress called a hearing to discuss the state of current cannabis reform and state level laws. 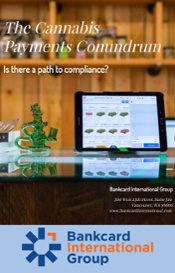 Congress holds hearing to examine the state of the current legal cannabis conundrum.

On Tuesday, just one week after election day, members on both sides of the aisle met to discuss “Developments in State Cannabis Laws and Bipartisan Cannabis Reforms at the Federal Level”.

The House Oversight Subcommittee on Civil Rights and Civil Liberties announced the hearing and opened it to testimonies from a panel of “pro-reform” advocates.

Several pieces of cannabis legalization legislation made the topic list, including the House-passed Marijuana Opportunity, Reinvestment and Expungement (MORE) Act, the States Reform Act (SRA), and the Cannabis Administration and Opportunity Act (CAOA).

The goal of the hearing was to examine the benefits of federal decriminalization in multiple sectors. There were three main issues discussed during the panel:

Witnesses who testified to the topic brought up multiple issues that are caused by or directly related to the federal prohibition of cannabis. They argued that federal prohibition creates increased barriers of entry for the industry, especially historically disadvantaged groups such as women and minorities.

Pro-reform advocates eloquently pointed out how federal prohibition undermines the goal of “eradication of the illicit market”. Furthermore, they argued the need for consistent and competitive tax rates to encourage regulated purchases and further undermine the illicit market. And while the removal of marijuana from the Controlled Substances Act would address criminal justice concerns, it didn't address all the issues.

When considered individually, each one of these acts may not seem like much, likely not enough, according to many pro-reform advocates. But when considered collectively, they represent a significant movement in cannabis reform progress.

This hearing shows that lawmakers in congress are listening to the majority of Americans and are willing to consider options. And that is a step in a positive direction, for Americans and the cannabis industry.

If you have any concerns or questions, feel free to reach out to us. We are always happy to help educate our clients and the public about the options for merchants in the cannabis industry.